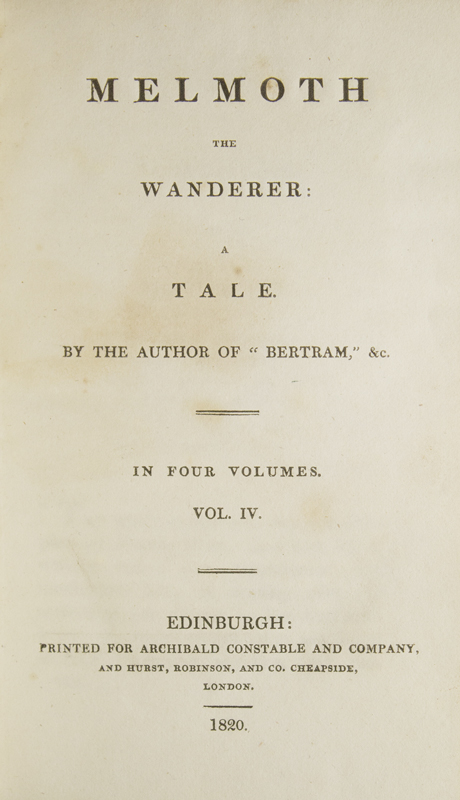 Charles Robert Maturin. Melmoth the Wanderer: A Tale. By the Author of “Bertram,” &c. Edinburgh: Printed for Archibald Constable and Company, and Hurst, Robinson, and Co. Cheapside, London, 1820.

Maturin’s late Gothic masterpiece, Melmoth the Wanderer, is a labyrinth sprawling across time and geography and through the ruins of all three Gothic forms: sentimental, historical, and supernatural. Melmoth, a contemporary of John Dee, made a Faustian bargain to gain supernatural powers and prolong his life, and the bargain is coming due. Balzac praised Melmoth, and Baudelaire esteemed “ce pâle et ennuyé Melmoth” as one of the great literary creations. Oscar Wilde was a great-nephew of Maturin, and the portrait in the Melmoth house seems a clear ancestor to Wilde’s novel The Picture of Dorian Gray (1891). Robert Ross wrote a biographical notice of Maturin in the 1892 edition of Melmoth. Wilde adopted the name Melmoth in his final exile.