In October 1962, Putnam published The Man in the High Castle by Philip K. Dick. This was his second novel to be published in hardcover, at a time when Dick was discouraged. His agents had returned the manuscripts of “mainstream novels” which no publisher had bought. Putnam also sold rights to The Man in the High Castle to the Science Fiction Book Club and that edition appeared a few weeks later.

When Avram Davidson, editor of The Magazine of Fantasy & Science Fiction reviewed The Man in the High Castle, in the issue for June 1963, he called it “a superior work of fiction” and concluded: “Don’t take it out of the library — buy it!”. Enough fans did, for the novel won the Hugo award at the September 1963 Worldcon. “Phil said he believed it was my review which won him the Hugo and gave his career a much-needed boost,” recalled Avram Davidson. The rest of Dick’s career is well known. He continued writing science fiction novels and gained a national and international audience after Paul Williams interviewed him for Rolling Stone in November 1975.

Chance Meeting publishes Avram Davidson’s 1963 review of The Man in the High Castle and his memoir of PKD from Locus 256, vol. 15, no. 5, for May 1982. It also includes a letter from Grania Davis from the same issue of Locus and a short essay by Henry Wessells. 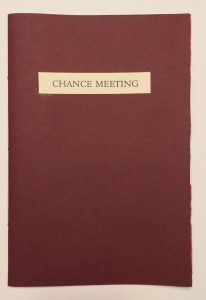